How do couples build intimacy in an era that valorizes independence and self-responsibility? How can a man be a good husband when full-time jobs are scarce? How can unmarried women find fulfillment and recognition outside of normative relationships? How can a person express their sexuality when there is no terminology that feels right? In contemporary Japan, broad social transformations are reflected and refracted in changing intimate relationships. As the Japanese population ages, the low birth rate shrinks the population, and decades of recession radically restructure labor markets, Japanese intimate relationships, norms, and ideals are concurrently shifting.

This volume explores a broad range of intimate practices in Japan in the first decades of the 2000s to trace how social change is becoming manifest through deeply personal choices. From young people making decisions about birth control to spouses struggling to connect with each other, parents worrying about stigma faced by their adopted children, and queer people creating new terms to express their identifications, Japanese intimacies are commanding a surprising amount of attention, both within and beyond Japan. With ethnographic analysis focused on how intimacy is imagined, enacted, and discussed, the volume's chapters offer rich and complex portraits of how people balance personal desires with feasible possibilities and shifting social norms.

Intimate Japan will appeal to scholars and students in anthropology and Japanese or Asian studies, particularly those focusing on gender, kinship, sexuality, and labor policy. The book will also be of interest to researchers across social science subject areas, including sociology, political science, and psychology. With support from Knowledge Unlatched, the full book is available through Open Access. 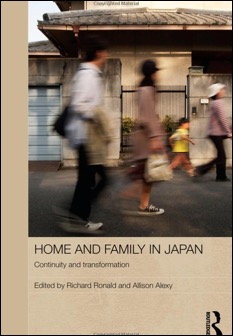 In the Japanese language the word ‘ie’ denotes both the materiality of homes and family relations within. The traditional family and family house - often portrayed in ideal terms as key foundations of Japanese culture and society - have been subject to significant changes in recent years. This book comprehensively addresses various aspects of family life and dwelling spaces, exploring how homes, household patterns and kin relations are reacting to contemporary social, economic and urban transformations, and the degree to which traditional patterns of both houses and households are changing. The book contextualizes the shift from the hegemonic post-war image of standard family life, to the nuclear family and to a situation now where Japanese homes are more likely to include unmarried singles; childless couples; divorcees; unmarried adult children and elderly relatives either living alone or in nursing homes. It discusses how these new patterns are both reinforcing and challenging typical understandings of Japanese family life.

2019. “Introduction: The Stakes of Intimacy in Contemporary Japan.” In Intimate Japan: Ethnographies of Closeness and Conflict, edited by Allison Alexy and Emma E. Cook. Honolulu: University of Hawai’i Press.

2019. “What Can Be Said? Communicating Intimacy in Millennial Japan.” In Intimate Japan: Ethnographies of Closeness and Conflict, edited by Allison Alexy and Emma E. Cook. Honolulu: University of Hawai’i Press.

2016. Laboring Heroes, Security, and the Political Economy of Intimacy in Postwar Japan. In Beyond the Cubicle: Job Insecurity, Intimacy, and the Flexible Self. edited by Allison Pugh. Oxford: Oxford University Press.

2011. “Intimate Dependence and Its Risks in Neoliberal Japan.” Anthropological Quarterly 84(4): 897-920. Part of a special issue devoted to “The Ethics of Disconnection in a Neoliberal Age” co-edited with Ilana Gershon.

2010. The Door My Wife Closed: Houses, Families, and Divorce in Japan. In Home and Family in Japan: Continuity and Transformation. Richard Ronald and Allison Alexy, eds. London: Routledge Press. 236-253.

Reviews and Other Publications
2014. Review of The Japanese Family in Transition: From the Professional Housewife Ideal to the Dilemmas of Choice by Suzanne Hall Vogel with Steven K. Vogel. 2013. Rowman and Littlefield. Social Science Japan Journal 17(2).