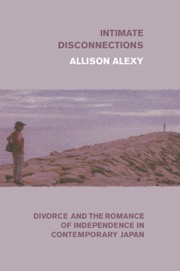 Intimate Disconnections: Divorce and the Romance of Independence in Contemporary Japan
University of Chicago Press, 2020

With support from the TOME program, this book is available through Open Access.

Although divorce has been legal in Japan for centuries, and the divorce rate has risen unsteadily throughout the postwar period, in the mid-2000s divorce in Japan rapidly became a newly visible and viable option in ways it had never been before. People who had never before thought seriously about divorce were fantasizing about leaving their spouses. Some moved past fantasizing to explicit planning and took concrete steps to end marriages. Others were anxious they might get suddenly left. As men and women consider divorce, or work to avoid it, they face questions about the risks and possibilities intimate relationships bring: How can people be intimate without becoming suffocatingly close? How should one build meaningful, loving, or supportive relationships when older models for behavior no longer feel feasible? What styles of intimacy most benefit the people in a marriage, families more generally, or the nation as a whole? Or, to put it in more personal terms, what do you do when you just can’t take it anymore?

Centered on a moment when heterosexual marriages are increasingly under stress, this book explores how Japanese men and women decide what makes a marriage good or bad, and how they end problematic relationships. Intimate Disconnections argues that when imagining, creating, and ending relationships, Japanese men and women often struggle to reconcile tensions they perceive between intimacy, connection, and dependence. As people decide to divorce or recover from it, they leverage three contradictory models for relationality: first, rhetorics of companionate marriage that suggest spouses should be best friends; second, newly popular neoliberal ethics that define a good person as atomized and entirely responsible for himself; and, third, Japanese cultural norms that label dependence (amae) as a positive marker of maturity. I theorize this fraught intimacy through separation as “connected independence,” a new, elusive ideal for relationships that reflects broader social concerns about the risks and benefits of interdependence.